In this expansive demonstration, concept and story artist Derek Thompson takes you through his storyboarding process using Adobe Photoshop®. From developing story concepts through shot design and construction, Derek generates a story sequence directly from his imagination. Topics include sequence building, editorial thinking, action and movement, simulating camera moves and more. You'll see first hand how the process of storyboarding can be fun, exciting, challenging and frustrating. Join Derek as he journeys towards the elusive reward that is a finished, pitch-worthy sequence. 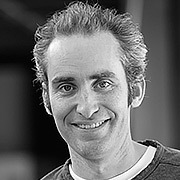 Derek Thompson received a BFA in Illustration from Otis/Parsons, and landed his first job for Dark Horse Comics while still attending college. He has worked professionally for over 14 years for a number of studios, including Rhythm & Hues, Lucasfilm and Electronic Arts. Derek has worked in a variety of disciplines, including storyboarding, visual development and creature design. He has contributed to numerous film projects, including Men in Black, The Mummy films, Star Wars: Episode 3 and WALL-E. In his free time, Derek paints abstract art and continues to self-publish collections of his monster drawings and comics. Derek is currently employed as a Story Artist for Pixar Animation Studios.