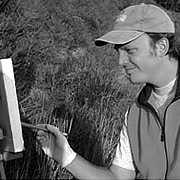 Erik Tiemens is known internationally as an award-winning movie concept artist. He studied traditional drawing and painting at Art Center College of Design, graduating with distinction in 1990. He has since worked on many films, theme park designs and television shows while also painting traditional landscapes and figurative works. Awards include Honorary Emmy for matte painting on Young Indiana Jones series, Emmy nomination for designing the opening of Star Trek's Voyager TV series, and was part of the Oscar winning effects team on both Jurassic Park and Forrest Gump. He also served as Concept Design Supervisor for Star Wars Episodes II and III and has shown his traditional paintings in galleries in California and Connecticut.