Construction For Perspective and Volume with Van Arno

Van Arno's series on drawing the human figure continues in Volume Two with discussions on drawing a male model. The anatomical differences from the female are noted. Poses of action and contortion then lead to a discussion of volumes in three dimensions. Van demonstrates how, with longer poses, the model can be drawn with simple volumes and then redrawn from another angle, without the model present. This exercise develops volumetric vocabulary and the ability to draw accurately, and in perspective, without pose reference. This is a vital skill for production and storyboard artists, where the angle of view is determined by a script or a director. Tone and light then are discussed in a final long pose. This figure drawing bootcamp is a valuable lesson for all aspiring figurative artists as Van Arno shares his thoughts and techniques acquired over an accomplished career as an industry and gallery artist. 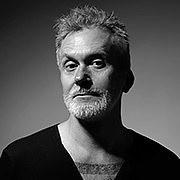 Van Arno is a Los Angeles based figurative painter whose work has been displayed in the U.S. and internationally for almost 20 years. Van's background includes illustration, amusement park design, game art in 2D and 3D, animation, and character design. His paintings have frequently been featured in Juxtapoz magazine and included in a national survey of Lowbrow painters. His ongoing fascination with the imagery of propaganda and its use of the heroic figure has attracted many admirers with Van's focus ultimately remaining on the figure and it's power to engage the viewer.