Senior Concept Designer and Illustrator, Maciej Kuciara, is a sought-after artist with various skill sets in both film and video games. Kuciara has worked on critically acclaimed titles such as The Last of Us, X-Men: Days of Future Past, and Marvel's Guardians of the Galaxy. Kuciara has worked for major clients including Dreamworks, Blur Studios, Universal, Crytek, and Naughty Dog. Maciej Kuciara has created with Art Café and produces podcast episodes based on his extensive experience working in entertainment. In addition, Kuciara co-founded Learn Squared Inc., an online art education platform that delivers high quality courses by visionaries and pioneers of video games, illustration, film, concept art, and graphics design. To connect with Maciej Kuciara, visit Kuciara.com and his Gnomon tutorial, Environment Design for Film.

GW: How did you hone your crafts, both in illustration and design? Did one come before the other or did your skill in each develop simultaneously?

MK: Ever since I was little, I liked drawing things, but I never walked on the regular academic path when it came to art foundation - that’s something I started to pay more attention to when I realized that drawing and painting are not just hobbies, but could be professions. Around 2002-2003, I discovered two forums on which I met most of the legends that I’ve always aspired to compete with. By posting art in places like Max3d.pl and Sijun Forums, I started to understand that foundation matters and it’s something I was lacking a lot. So, I started learning and never stopped.

In my experience, Illustration came first. I dared to call myself a designer without knowing anything about the design early on in my career, but I quickly realized that design is something that (much like foundation for illustration) needs to be learned, practiced and developed. I think only in my very recent works I can see real design come to play.

GW: You collaborated on movie projects such as Captain America and Guardians of the Galaxy. How easy or difficult did you find the work on these projects?

MK: Guardians of the Galaxy was a very interesting project, because unlike Captain America: Civil War, or later, Ghost in the Shell, I only experienced the very end of production from the VFX side. It was a very collaborative effort between all the folks in MPC art department. One of the major challenges was to find a common language that would glue, or bind together, what other artists were doing. Virginie Bourdin, Art Director at MPC at the time, was a huge help who ensured that all of us were on the same page. But I think the biggest difficulty was a combination of learning how different concepting is, both on the VFX side, and when doing it remotely.

Captain America had its own sets of challenges and learning curves. For example: working with set designers and gaining a better understanding on how sets are built, and what role illustrators play into all of that, was essential. But, all in all, it wasn’t a very difficult project, mainly because I had already worked with the production designer of the show, Owen Paterson, on a previous film project. Therefore, I knew what to expect, and I tried to deliver my best.

GW:  GW: You have also worked on game titles like The Last of Us. What are the key differences to working in the movie industry compared to working in video games?

MK: On the surface level, both industries are really very similar. The differences show mostly in production. In video games, you will spend a lot of time thinking about scenes in a very interactive way, not only from design and aesthetic point of view, but also from gameplay functionality. The biggest difference in film is that you’re likely going to work on a specific location with very specific limitations as to how it’s going to be built later on. Everything has to be done to scale, and, a lot of time, to budget.

GW: In addition to working with various clients in entertainment, you have also taught at Gnomon. What stands out to you about your time teaching at Gnomon?

MK: Gnomon was one of the very first teaching platforms I had the pleasure working with. I really enjoyed creating Master Class and it taught me a lot about what kind of teacher I was and I ought to become. Together, with long-gone Red Engine school, Gnomon exposed me to sharing my knowledge with others and challenged me to become more articulate with thoughts and knowledge that I was trying to share. 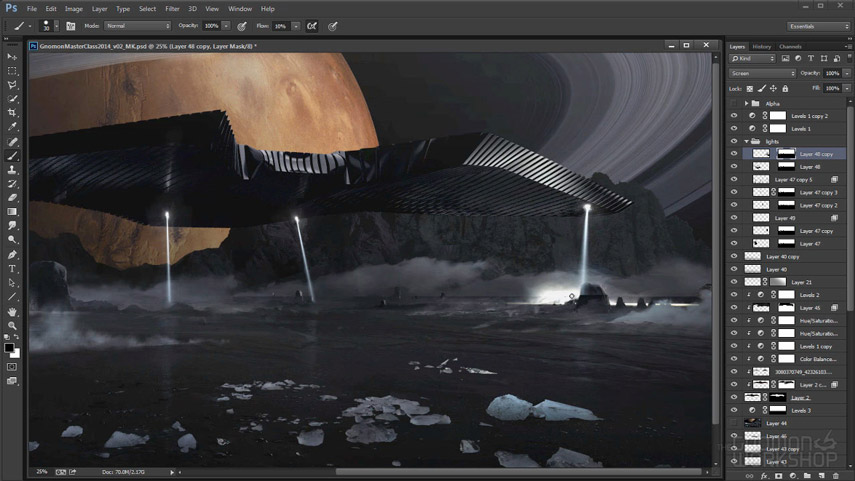 GW: How do you approach creating a design or an illustration in a new genre, i.e., portrait to landscape or realism to fantasy?

MK: All projects are very different and it’s really hard to pinpoint the exact approach. I generally always tend to start with a question of expectations. If I know what the client or studio is after, I can suggest the best solution on how to approach the problem based on my experience (almost 15 years now) working in the industry. On some projects, I would start with very simple sketches to explore ideas, shapes and the overall vision. On others, diving into full illustration to create inspirational pieces can answer a lot of high level questions before diving deep into designing the details.

GW: You have co-founded Learn Squared Inc., which is an art school offering high quality courses. How and why did that come about?

MK: The idea to start a school stemmed from multiple different sources. By the time the idea of creating Learn Squared came into my mind, I already had a firm understanding around the value of teaching. Not only when it came to helping the art community, but also when helping individuals learn enough specifics to get their foot into the industry (like with my personal experience). Another aspect that was in the forefront of my mind, was how valuable these experiences are in self-development. And lastly, another part that played an intricate role developed after I learned how many of my artist friends in the US were in debt after art school, and yet, remained at similar levels as other artists who had never been to any art schools or universities. I also knew how large of the impact things like Gnomon DVDs or schools like CDA and Red Engine had on the industry itself.

Although the idea of the school started in my head, the current shape of it was pretty much shared evenly across all Learn Squared co-founders. Without them, Learn Squared would most likely be a completely different thing.

What connected all the current and former founders of Learn Squared, however, was a very simple trait: attention to details and the drive to create work on the highest achievable level. 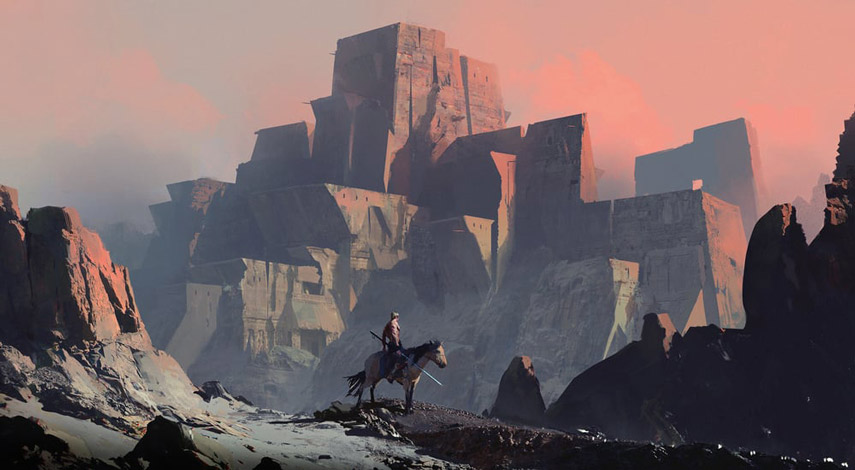 GW: You have also created with Art Café. Would you tell us more about that and your podcast?

MK: I started Art Cafe as an extension of teaching, hanging out with friends online, and talking to artists I normally don’t have time to go out and meet up with in person. I honestly thought it would last only a few episodes as an experiment, but now we’re in 2018, and have had over eighty-something episodes, and we’re still going. What makes me want to continue podcasting is how impactful of a resource I have witnessed it become. Not a month goes by without hearing stories from the show’s fans, and how they took my advice, or a guest’s advice, to heart and started making a living in the entertainment industry. It’s those emails and DMs that justify the effort. One way or another, I just like to give what I think will be valuable to others.

GW: How do you find motivation when inspiration seems to be sparse? Or how do you break through those seemingly unbreakable “creative-brick-walls?”

MK: This is certainly an in-depth question that could easily fill hours of podcasting. The truth is, the answer to this is never simple and it is definitely not the same for everyone. People are very complex on so many different levels, and so, inevitably, certain advice will help others while simultaneously be ineffective for others. But what I’ve learned over time from my own experience, and from the experiences of colleagues, self-help books, motivational podcasts, audiobooks, videos, etc., is that there are certain patterns that most of us can relate to, share, and can implement into our lives.

We all learn and progress in increments, very rarely in leaps. You almost certainly need to practice a lot to master the new skill and a vast majority of that practice will be a grueling, uncomfortable grind. So when I hit a wall, I ask myself a simple question: “What would be an absolute minimum effort thing for me to do right now, that will have even a minimal positive result as soon as it’s done?” It could be anything, from simply taking a break, to going for a walk and refreshing the mind, unloading the stress of being stuck, to pushing myself to spend the next fifteen minutes simply DOING the work, whether or not that means meeting the creative expectations in that timeframe. However low the net positive is, it is still a step forward.

GW: Thank you so much for sharing your experiences, Maciej! We are so grateful for your time and kindness.

MK: Thanks for having me, Gnomon! And thanks, Genese Davis!